When it comes to understanding how different brain regions influence human cognition and behavior, gray matter often steals the show.

“Neuroscience has always been super focused on the gray matter of the cerebral cortex,” says Aaron Boes (09MD, 09PhD), University of Iowa associate professor of pediatrics, neurology, and psychiatry, and a member of the Iowa Neuroscience Institute. “It’s where neurons are firing, where changes to blood flow and metabolic activity happen while the brain is active. That’s where the field is drawn because neuroscientists see changes with functional imaging.”

But UI research, led by Boes and Justin Reber, PhD (21F), a former UI postdoctoral research fellow in psychiatry, is challenging the idea that gray matter (the neurons that form the cerebral cortex) is more important than white matter (the myelin-covered axons that physically connect neuronal regions) when it comes to cognitive health and function.

Damage to dense structural connections in the brain is a better predictor of poor cognitive outcomes than damage to functional hubs, according to a recent study led by Iowa researchers. The first brain model is a map of edge density, measuring white matter connectedness. Dark purple areas feature sparse connections, compared to more highly connected yellow regions. The second brain model expresses participation coefficient, measuring the global “hubness” of gray matter regions. Blue regions are involved in only a few brain networks, whereas brighter regions are part of many different networks. 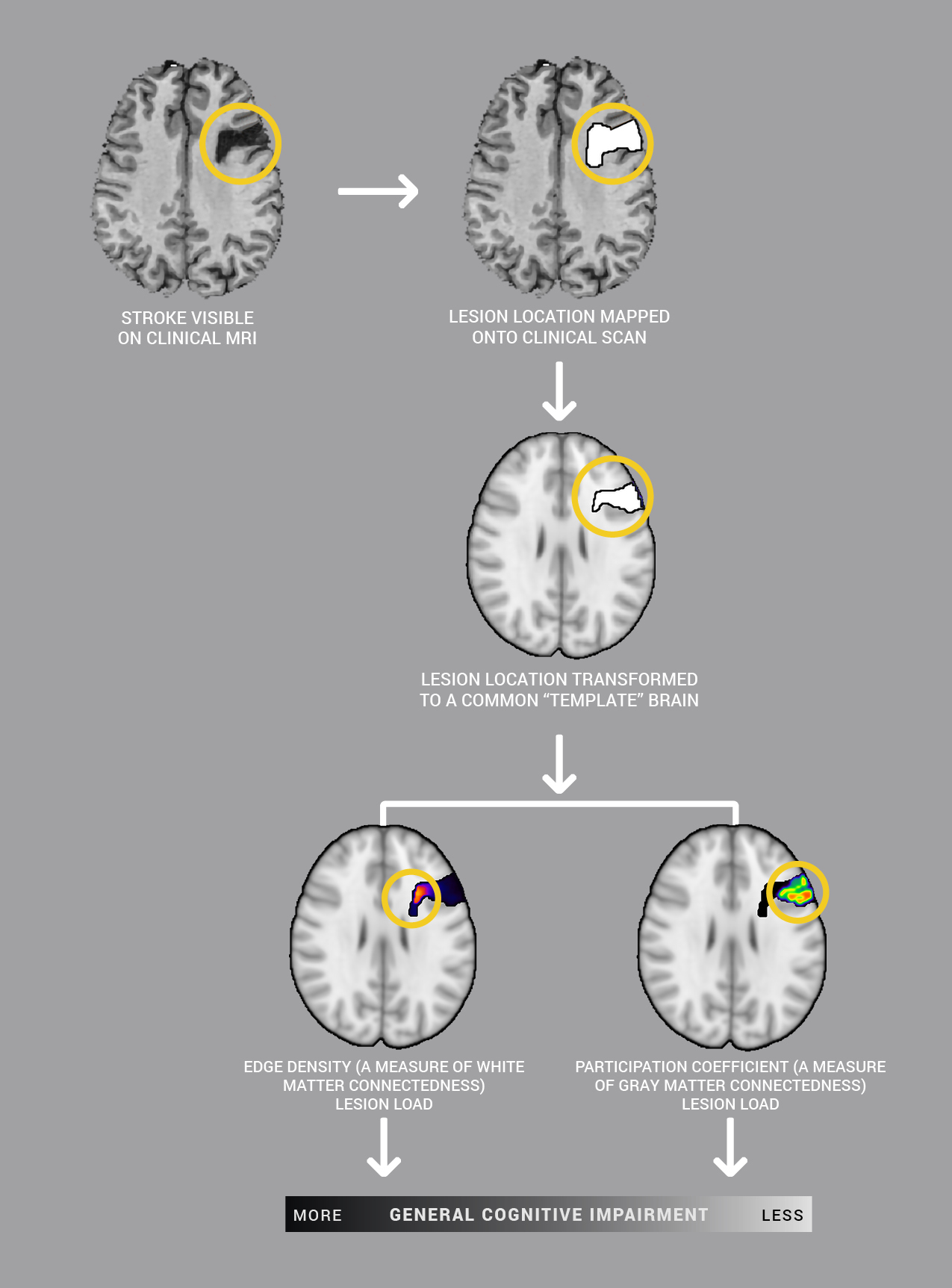 The findings, based on a method known as lesion-symptom mapping, may help neurologists and neuropsychologists better predict the long-term effects of strokes and other forms of brain injury.

“The most unexpected aspect of our findings was that damage to gray matter hubs of the brain that are really interconnected with other regions didn't really tell us much about how people would do on cognitive tests after brain damage. On the other hand, people with damage to the densest white matter connections did much worse on those tests,” explains Reber, who was first author on the study. “This is important because both scientists and clinicians often focus almost exclusively on the role of gray matter. This study is a reminder that connections between brain regions might matter just as much as those regions themselves, if not more so.”

The study, published in PNAS, analyzes brain scans and cognitive function from over 500 people with localized areas of brain damage caused by strokes or other forms of brain injury. Looking at the location of the brain damage (lesions), the UI team correlated the level of connectedness of the damaged areas with the level of cognitive disability the patient experienced. The findings suggest that damage to highly connected regions of white matter is more predictive of cognitive impairment than damage to highly connected gray matter hubs.

Research on cognition often focuses on networks within the brain, and the importance of a brain area can be estimated based on how connected it is. Network hubs are highly connected brain regions that play a major role in coordinating processing in brain networks.

The UI team identified the location of hubs within both gray and white matter from brain imaging of normal healthy individuals. The researchers then used brain scans from patients with brain lesions to find cases where areas of damage coincided with hubs. Using data from multiple cognitive tests for those patients, they were also able to measure the effect that hub damage had on cognitive outcomes.

Surprisingly, damage to highly connected gray matter hubs did not have a strong association with poor cognitive outcomes. In contrast, damage to dense white matter hubs was strongly linked to impaired cognition.

“The brain isn't a blank canvas where all regions are equivalent; a small lesion in one region of the brain may have very minimal impact on cognition, whereas another one may have a huge impact. These findings might help us better predict, based on the location of the damage, which patients are at risk for cognitive impairment after stroke or other brain injury,” Boes says. “It's better to know those things in advance, as it gives patients and family members a more realistic prognosis and helps target rehabilitation more effectively.”

UI registry is a unique resource for neuroscientists

The new findings were based on data from over 500 patients, which is a large number compared to previous studies and suggests that the findings are robust.

The data came from two registries: the Iowa Neurological Patient Registry, based at the UI, which provided data from 402 patients, and Washington University in St. Louis, which provided data from 102 patients. The Iowa registry is over 40 years old and one of the most comprehensive patient registries in the world, with over 1,000 subjects with well-characterized cognition derived from hours of paper and pencil neuropsychological tests and detailed brain imaging to map brain lesions. The registry is directed by Daniel Tranel, PhD, UI professor of neurology and one of the study authors.

Reber notes that the study also illustrates the value of working with clinical patients as well as healthy individuals in terms of understanding relationships between brain structure and function.

“There is a lot of really excellent research using functional brain imaging with healthy participants or computer simulations that tell us that these gray matter hubs are critical to how the brain works, and that you can use them to predict how well healthy people will perform on cognitive tests. But when we look at how strokes and other brain damage actually affect people, it turns out that you can predict much more from damage to white matter,” he says. “Research with people who have survived strokes or other brain damage is messy, complicated, and absolutely essential, because it builds a bridge between basic scientific theory and clinical practice, and it can improve both.

The brain isn't a blank canvas where all regions are equivalent; a small lesion in one region of the brain may have very minimal impact on cognition, whereas another one may have a huge impact.”
Aaron Boes (09MD, 09PhD)

“I cannot stress enough how grateful we are that these patients have volunteered their time to help us. Without them, a lot of important research would be impossible,” he adds.

Founded in 1982, the Iowa Neurological Patient Registry is a unique resource for neuroscientists across the world.

With brain imaging and neuropsychological data from over 4,000 patients, the registry’s strength lies in its size, which allows scientists to determine if damage to one specific part of the brain consistently leads to the same cognitive or behavioral change in a large group of patients.

The registry recently enrolled their 1,000th patient for whom they have the most advanced and detailed brain imaging that allows precise mapping of lesions onto an average healthy “brain space.”

“We’re excited to hit the 1,000 milestone, which puts us in the same category with other major, large-scale neuroscience initiatives happening now, like the Human Connectome Project and the Alzheimer’s Disease Neuroimaging Initiative,” says Aaron Boes (09MD, 09PhD), UI associate professor of pediatrics, neurology, and psychiatry. “A major difference being that those are multi-institutional efforts, and this one is unique to Iowa.”

Over its 40 years, scientists have used registry data to explore fundamental aspects of cognition, behavior, and emotion—ranging from intelligence, fear, belief, and memory, to well-being and nostalgia. Studies based on registry data have a long track record of receiving federal funding and being published in top-tier journals.

Boes’ study revealing the importance of highly connected white matter regions to normal cognition is one of the latest studies made possible by the registry. He credits registry director Daniel Tranel, PhD, with its longevity and strength.

“The reason studies like ours are possible is because Dan’s work over the last 40 years has created what is probably the best characterized neurological patient registry in the country,” he says.

I cannot stress enough how grateful we are that these patients have volunteered their time to help us. Without them, a lot of important research would be impossible.”
Daniel Tranel, PhD, UI professor of neurology

Tranel, UI professor of neurology and psychological and brain sciences, has been with the registry since it was established in 1982 by renowned husband-and-wife neuroscientists Antonio and Hanna Damasio. Reflecting on the registry’s success, he says he had no idea that the registry would still be going strong 40 years on.

“I don't think we had any clue that we would be able to be as successful as we have been,” he says. “Really, I didn't appreciate the special advantages that Iowa confers—it's not just a coincidence or good luck that it works here.

“It works because we are the state’s only tertiary health care center, so everybody comes here for their unusual problems,” Tranel adds. “People live in the same place for a long time, which is very different from an urban setting. And then there's a loyalty factor that's in play; there are some people in the registry who have been in there from day one.”

Discoveries based on the unique data available in the registry continue with the next generation of UI investigators recruited to the Iowa Neuroscience Institute, including Boes, Kai Hwang, PhD, and Jan Wessel, PhD, who each recently received new R01 grants from the National Institutes of Health.

In addition to these Iowa-grown projects, Tranel receives a steady stream of requests from researchers around the world. In just the past year, more than 10 papers by researchers at multiple institutions have used data from the registry.

“The registry is gaining momentum,” Boes says. “And with greater integration between lesion work and the Human Connectome Project, it's an exciting time in neuroscience.”

The Iowa Neurological Patient Registry is recruiting eligible patients who are interested in being a part of broader aspects of neurological research. Interested providers are encouraged to call 1-319-353-8514 to refer their qualified patients for possible inclusion into the registry or to relay their interest in collaborating with Daniel Tranel, PhD, or Aaron Boes, MD, PhD.