Catherine Marcinkiewcz’s research is fueled by a personal need to understand the effects of stress, alcohol, and antidepressants on the brain and to find better ways to treat depression and alcohol addiction through targeted therapies.

Marcinkiewcz, PhD, an assistant professor of neuroscience and pharmacology, is also looking for possible links between alcohol consumption and Alzheimer’s disease—specifically, if alcohol triggers an earlier onset of the neurodegenerative disease.

“I was initially drawn to this area of research because I have a family history of alcohol dependence, depression, and Alzheimer’s. So, this research is very personal because I have seen the suffering that it causes firsthand,” Marcinkiewcz says. “Devising better treatments for intractable brain disorders is where I feel that I can have the greatest positive impact on the lives of others.” 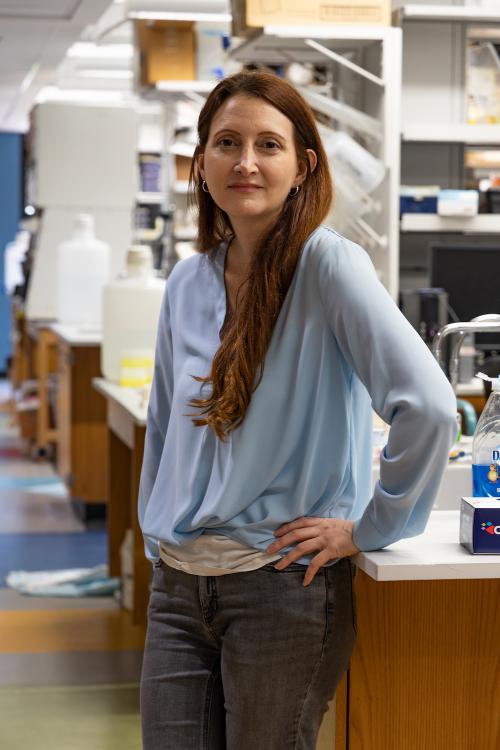 Her work is supported by several grants, including one from the National Alliance for Research in Schizophrenia and Affective Disorders, now part of the Brain and Behavior Research Foundation. Marcinkiewcz also received a young investigator award from the foundation in 2019.

She is also looking into the impact of stress on the brain. Prolonged stress can lead to feelings of being overwhelmed, which often drive people to consume alcohol to unwind. The combination of stress and alcohol is unhealthy and can even be dangerous, she says. At lower doses, alcohol may be neuroprotective and even reduce inflammation, but at higher doses it’s neurotoxic. To some extent, the same is true about stress.

“A little bit can be stimulating but too much is detrimental,” she says. “In the real world, stress and alcohol consumption usually co-occur, so the goal of our research is to understand how they interact at the circuit level and design better treatments to break the cycle of stress-fueled alcohol consumption,” she says.

Marcinkiewcz also received a grant from the National Institute on Alcohol Abuse and Alcoholism in 2020 to investigate connections between alcohol consumption and Alzheimer’s disease to improve detection and treatment. Alzheimer’s is characterized by neurofibrillary tangles in the brain. These tangles can exhibit a high concentration of the protein tau. Marcinkiewcz wants to know if excessive alcohol consumption boosts tau accumulation in the brain, thereby accelerating neurodegeneration.

Devising better treatments for intractable brain disorders is where I feel that I can have the greatest positive impact on the lives of others.”
Catherine Marcinkiewcz, PhD

Through her work, Marcinkiewcz envisions a future where patients with depression could receive targeted care for their condition.

“For instance, the way we treat depression may change if the patient struggles with alcohol dependence or has a history of post-traumatic stress disorder,” she says. “I hope my work will pave the way to personalized treatment plans.”

Marcinkiewcz came to the University of Iowa in 2018, and one of the things she most appreciates about the UI is the many opportunities to collaborate with researchers in other fields.

“Some of the most exciting projects in my lab are the ones that are cross-disciplinary, bridging multiple areas of expertise,” she says. “These tend to be some of the more innovative projects and are much broader in scope than what a single person or lab could accomplish. This collaborative approach has allowed me to tackle big questions that wouldn’t have been possible otherwise.”

When does alcohol consumption have a toxic effect on the brain?  And what are the possible links between alcohol consumption and Alzheimer’s disease? The Marcinkiewcz lab is supported by several major grants to address these questions in neurobiology.