John Wells (65MD) admits that he's lost track of the exact number of lives he and his colleagues have saved during his career as a crisis negotiator.

"The most rewarding part of my job is that everybody lived," says Wells, who used his medical background in neurology and psychiatry to handle a range of crises, including hostage situations. He estimates that he took part in roughly 50 crisis cases over the course of his career in mental health care.

After completing medical school at Iowa, Wells did his medical residency at the University of Southern California. He spent the majority of his career with the Los Angeles Department of Mental Health, working as a clinical director and moving up through the ranks to become deputy director of the department.

By 1970, the police in L.A. needed help responding to cases involving behavioral issues that required emergency treatments. So, the Department of Mental Health put together a new psychiatric emergency team that worked across 15 counties, 24/7.

crisis cases over the course of his career

"We spent a lot of time with the police department, so they were very appreciative," Wells says. "They were able to intervene quite effectively by calling our people out to get things under control." 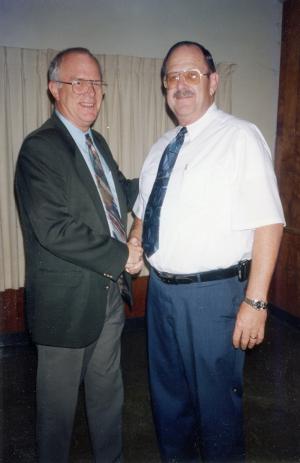 While still working with the psychiatric emergency team, Wells was recruited to join a 24/7 crisis intervention team. This team worked with the L.A. County SWAT, within the sheriff's department, de-escalating situations that could have become violent.

In the 1980s, word of the L.A. Sheriff's Department's success spread and even caught the attention of the FBI, which taught Wells' team how to handle hostage situations.

Looking back on his career working alongside the L.A. County Sheriff's Department, one particular hostage crisis stands out in his mind: A subject had trapped multiple people in a house, so the police set up a perimeter, prepared to take drastic measures.

Instead of using force, the sheriff called the crisis intervention team to the scene to provide a psychiatric perspective. They negotiated with the person for food and other necessities, and eventually talked him out of the house.

“We told him, we’re going to solve this problem together, cooperatively, and peacefully,” Wells recalls. “And nobody’s going to get hurt.”

Wells says the most difficult part of his job was staying calm during highly stressful situations or encounters.

In one instance, Wells and his team were trying to negotiate with a man on a roof while a crowd was gathering on the street below. He could feel the pressure intensifying, so he needed to resolve the life-threatening crisis quickly.

"You get pushed out of your modus operandi that way, and things get kind of sweaty," Wells says.

Despite additional obstacles, Wells and his team were still able to negotiate with the man and keep everyone involved safe.

We told him we're going to solve this problem together, cooperatively, and peacefully. And nobody's going to get hurt.”

After three decades of service, Wells retired from the Department of Mental Health and the crisis intervention team, but he still used his skills to serve others. He provided therapy for inmates and recovering drug users through a private practice. Wells saw his last patient in 2018 while working in a rehabilitation facility.

He currently volunteers for the Arcadia Police Department. This is his 40th year with the agency.

Now retired at age 86, Wells looks back on his career with appreciation.

"I wouldn't give it up for a second. It's been wonderful," Wells says. "I still like to identify myself as a physician."