A new, minimally invasive treatment is now available in Iowa for premature babies born with a potentially life-threatening heart defect.

In October 2019, pediatric specialists at University of Iowa Stead Family Children's Hospital became the first in the state to offer the pea-sized Amplatzer Piccolo Occluder, a device to treat newborns with patent ductus arteriosus (PDA), a condition in which the ductus arteriosus does not close.

This opening is important prior to birth to allow oxygen-rich blood from the mother to circulate throughout the developing fetus. The ductus arteriosus typically seals itself shortly after birth, but in some cases, it fails to close, which makes it difficult for babies to breathe normally due to increased blood flow to the lungs. Some babies may also develop bodily organ complications from poor blood flow, which can be a very serious problem for some.

All premature babies have varying levels of PDA, and if it's severe enough, it requires intervention.

The Amplatzer Piccolo Occluder is self-expanding and made of a wire mesh that seals the opening without requiring surgery. It's crucial that it's minimally invasive due to the delicate size of premature babies.

“For little babies who only weigh 600 grams to a kilogram, their femoral veins are very small,” says former UI pediatric interventional cardiologist Daniel McLennan, MBBS, who helped start the multidisciplinary clinical program. “Their hearts are fragile, so this device doesn’t put too much strain on the heart.”

A better option for the tiniest babies

The new procedure works by creating a small incision in the patient's thigh and guiding the device through blood vessels to reach the heart. The device is incredibly thin, as small as 3 millimeters, which allows it to smoothly seal the duct opening without causing any obstruction.

“We have four teams, with multiple staff in each one, working in harmony together in the cath lab to make sure this procedure is done safely,” says Osamah Aldoss, MBBS, MD, director of the Pediatric Catheterization Laboratory. “That’s the key for success.” 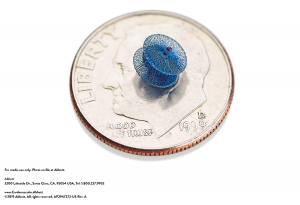 The Amplatzer Occluder Piccolo, a new device to treat newborns with patent ductus arteriosus, is self-expanding and made of a wire mesh. It's crucial that the pea-sized device is minimally invasive due to the delicate size of premature babies.

Due to the novelty of this procedure, UI staff received specialized training, as it is unlike other heart operations completed in the state.

When Race Fuller was born at 23 weeks he weighed just 1 pound and was immediately in critical condition due to PDA. His UI care team advised that the best option for his treatment was the Amplatzer Piccolo device, considering his small size.

Before this device became available, the only option was surgery, which comes with a higher risk of vocal cord paralysis, collapsed lungs, and other serious issues.

"The direct surgical complications that can happen, either trauma or other significant deterioration, are much less likely with this device," says Patrick McNamara, MD, director of the neonatology division in the Stead Family Department of Pediatrics.

His mother, Kristin Fuller, says she was comfortable going forward with this new procedure because the medical team was confident in their capabilities.

After the procedure, the staff was able to wean Race off his ventilator support, and just two weeks later he was extubated.

"It was actually like night and day," Kristin Fuller says. "A couple days after the procedure he was better. It was miraculous."

The UI Stead Family Children's Hospital team has successfully performed roughly 17 procedures so far. The latest evidence from studies around the country suggests this device is about 98% successful.

"They've been smooth procedures, and there's been no major complications," McNamara says. "We have a well-organized team and this device is the future for PDA closure in extremely preterm babies."

UI Stead Family Children's Hospital is a leader in family-centered care, which includes the family as members of the multi-disciplinary care delivery team.