Aquarius Bunch was 23 weeks pregnant with her second child when she tested positive for COVID-19.

Like most people who test positive, Bunch was sent home to isolate and recover. But her condition quickly deteriorated—her fever spiked, her cough intensified, and her back and lungs ached.

"It felt like someone had been punching me in the back for days," she recalls.

A week later, she was back in a Waterloo, Iowa, emergency room, clinging to life. She was placed on a ventilator and within hours was transferred to University of Iowa Hospitals & Clinics, where her multidisciplinary care team collaborated on the intricacies of putting a pregnant patient on life support.

It was an outcome her care team - which included surgeons, pulmonologists, high-risk obstetricians, and anesthesiologists - was concerned might never happen.

"The COVID-19 pandemic has presented us with some very dark times in the hospital, so it is truly inspirational to see a patient overcome this terrible disease," says Sharon Beth Larson, DO, MS, UI cardiothoracic surgeon and surgical director of the ECMO program. "She’s the greatest beacon of hope we’ve seen during this entire pandemic.”

Even more surprising was that Bunch left the hospital with a healthy pregnancy, making her the first documented case in the United States of a pregnant COVID-19 patient who was placed on ECMO without needing an emergency delivery. It was the optimal outcome to a case that could have turned out much worse.

Bunch recently learned just how bad her condition was.

"I had no idea I was that sick," she says. "When I started regaining consciousness, I knew I was being well cared for. I knew I was going to be okay. I just thank God for these doctors."

When Bunch arrived in the Emergency Department at UI Hospitals & Clinics in April, a team of specialists was already developing her care plan. Doctors from her Waterloo hospital had been in communication with UI doctors for hours.

Bunch had been placed on a ventilator before leaving Waterloo, but her condition worsened on the trip to Iowa City.

"Her lungs were so sick that the ventilator was not able to provide the amount of oxygen she needed," Larson says. "It became apparent she would need ECMO."

ECMO is a life-support system that does the job of the heart and lungs in order to provide them a chance to recover, Larson says, adding that ECMO is typically a bridge to recovery or transplant.

"Only patients who have exhausted every other therapy are put on ECMO," she says, and even then, most patients have about a 50% recovery rate. ECMO puts patients at risk of bleeding, as they are given blood thinners to reduce or prevent clotting. Mobility while on ECMO can be difficult, as well. The uncertainty of COVID-19 added to these risks.

Larson and the team began planning surgery to place Bunch on ECMO with another major complicating factor in mind: the pregnancy.

"In that moment we didn't have a lot of experience with COVID-19 patients going on ECMO, and we had never placed a pregnant woman on ECMO with the expectation that she would remain pregnant," Larson says.

The cannulas—the tubes connecting the ECMO machine to the patient—are often placed through the femoral veins in the groin, but Larson knew a growing pregnancy could compress the tubes and cause further complications. Instead, a dual-lumen cannula was placed through her internal jugular vein on the right side of her neck.

Kimberly Leslie, MD, a high-risk obstetrician, and Sarah Watson, MD, a fellow in maternal-fetal medicine, were among the team of specialists consulting on Bunch's care.

Leslie and Watson had a difficult decision to make when it became clear ECMO was needed. An emergency delivery is often considered if the mother is critically ill, but little was known at the time about whether delivery could help women improve from severe COVID-19 infection.

They initially discussed an emergency cesarean section for the health of mom and baby, but because ECMO patients are given blood-thinning medication, that was now a dangerous option.

"Dr. Leslie and I had an unusual situation," Watson says. "We had to go to the bedside and talk about what was best for this mother. The reality was that this patient was critically ill and needed to be on ECMO right away."

For Andrea Greiner, MD, MHA, this was a quintessential case for maternal-fetal specialists, who are often faced with very little time to make the best care decision for the mother and baby during a high-risk pregnancy or delivery.

"We have to make very quick decisions," says Greiner, who is the director of maternal-fetal medicine at UI Hospitals & Clinics. "You can't let fear and uncertainty drive your decision-making process. If you make the wrong decision, you can't pull that back. If they'd delivered and she had hemorrhaged - it's hard to pull back from that." 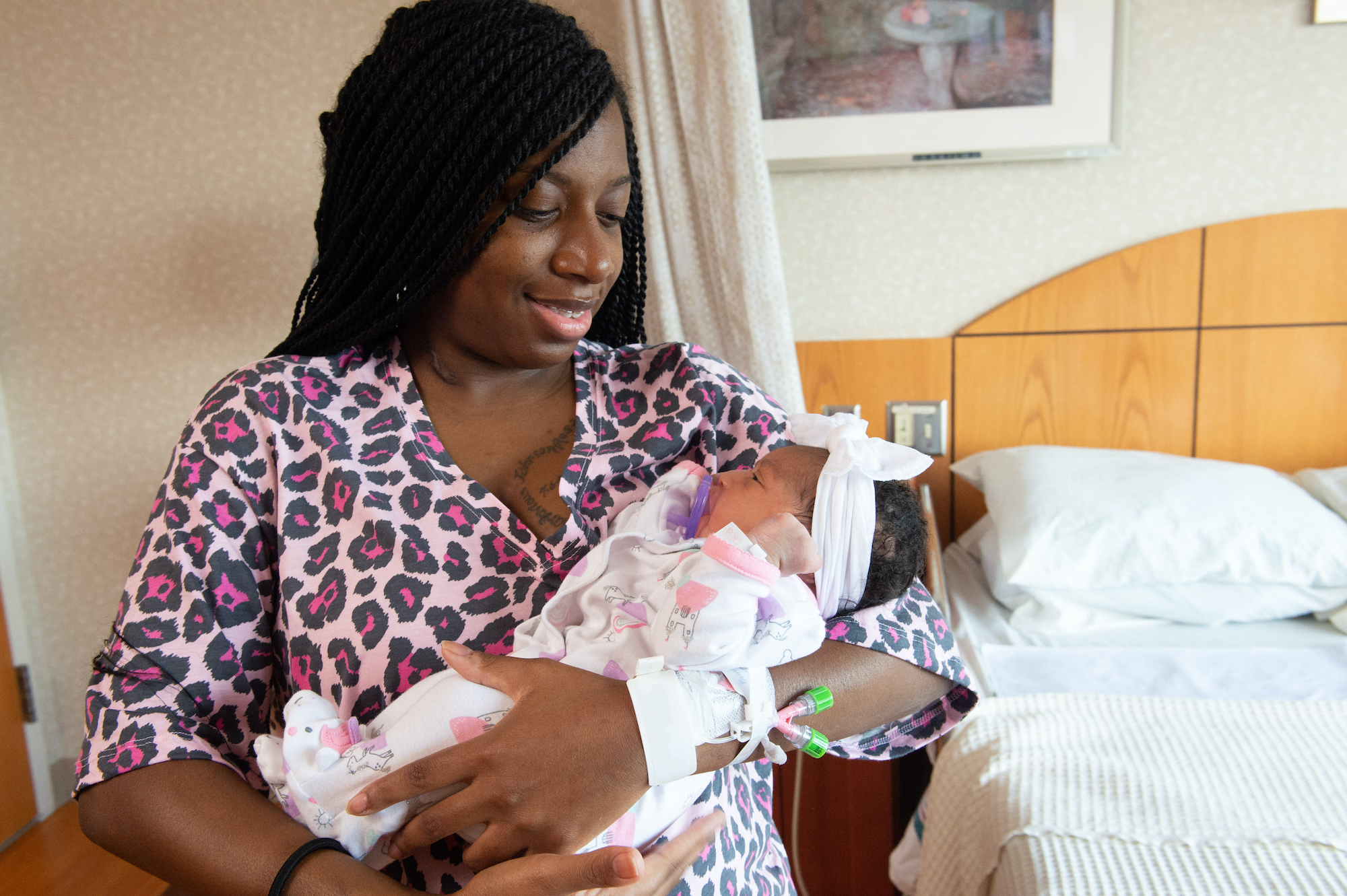 Aquarius Bunch is pictured with her newborn daughter after delivering via cesarean at UI Hospitals & Clinics.

As Bunch was taken off sedation a few days after being placed on ECMO, she was assessed by a neurology team and found to have no brain damage from the early oxygen deprivation. Her team immediately started helping her become mobile to prevent her body from deconditioning.

Doctors and physical therapists first started by having Bunch dangle her feet from the bed while sitting up on her own. Eventually, she was standing on her own, and then walking while still connected to both the ventilator and the ECMO system. To ensure her safety, she was surrounded by physical and occupational therapists.

"If she had fallen, it could have removed the breathing tube; falling could have removed the cannula. It was a dangerous situation," Larson says. "Her ambulating was orchestrated like one of those Cirque du Soleil shows would be. There was high risk, but there was the experience of a very well-trained team to make it successful.”

Bunch was taken off ECMO after just eight days, when Larson and her team felt her lungs were strong enough to begin working on their own. The next day, she was taken off the ventilator. Four days later—and just 13 days after arriving at UI Hospitals & Clinics—she was sent home.

Her ambulating was orchestrated like one of those Cirque de Soleil shows would be. There was high risk, but there was the experience of a very well-trained team to make it successful.”
Sharon Beth Larson, DO, MS

Larson is proud of the team of specialists working the night Bunch was admitted and says that collaboration was a large part of Bunch's recovery.

Once discharged, Bunch continued to meet with her high-risk pregnancy team to determine the best care for her and the baby throughout the pregnancy.

"Little is known about the risk of transmission to the baby, or how infection may impact the health of the pregnancy," Watson says. "The baby was monitored closely for growth and other signs of well-being."

The care team ultimately decided a cesarean section would be warranted because of the complexity of the pregnancy. In August, Bunch delivered a healthy baby girl without any complications.

"This is a remarkable beginning for Aquarius's daughter and a remarkable end to an incredibly high-risk pregnancy," Watson says.

Remember Aquarius Bunch? She was diagnosed with COVID-19 while she was pregnant and became so sick that her life and her...

Posted by University of Iowa Hospitals & Clinics on Tuesday, August 18, 2020

A family guide to ECMO

Extracorporeal membrane oxygenation, or ECMO, is a therapy that adds oxygen to your loved one’s blood and pumps it through their body like the heart.