Kasi: Liquid biopsies as a standard of cancer care

A patient's hesitation to do a liver biopsy was a powerful catalyst for Pashtoon Kasi's interest in the potential of liquid biopsies to diagnose and manage cancer.

Kasi's patient was a young Navy Seal with colon cancer and liver metastases, but he had managed the disease using a variety of treatments over several years. However, the cancer appeared to be worsening again, and new spots appeared.

"I suggested getting another liver biopsy to see if the cancer has a new mutation or finding," says Kasi, MD, MS, a specialist in gastrointestinal cancer who was in his first faculty position at the time. "The patient said, 'I will do anything and everything, but I'm not doing another biopsy!'"

So, Kasi suggested a liquid biopsy, a method he had started to hear more about and thought might be a good option for this patient. Unlike traditional biopsies, which require a needle biopsy or invasive surgery to collect tissue from the tumor, liquid biopsies use a simple blood draw to collect tumor DNA circulating in the patient's blood.

"We got results that were very intriguing," he says. "Just like Darwin's theories of evolution and survival of the fittest, the cancer had evolved over time and continued to change. We were able to rechallenge the tumor with some of the old treatment that had stopped working."

This early success fueled Kasi's interest. In 2019, he moved from Mayo Clinic to UI Holden Comprehensive Cancer Center to establish a center for liquid biopsies and offer it to more patients. Today, liquid biopsies are a strong focus in his clinical practice and research efforts. 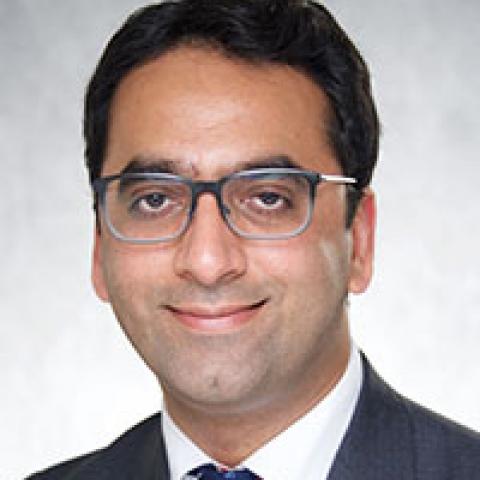 Kasi is also involved in clinical trials to advance the use of liquid biopsies for early-stage cancers. The UI is one of the first and leading sites under an expanded access program using novel liquid biopsies, custom-built for each patient's tumor, to see if there is any leftover cancer DNA following surgery. The results could help guide the use of chemotherapy after the surgery.

In many ways, I consider liquid biopsy as my standard of care for most, if not all, patients depending on the stage of their cancer. It truly has the potential and already is revolutionizing cancer care for our patients.”
Pashtoon Kasi, MD, MS

The biggest advantage to patients is the biopsy sample can be obtained noninvasively. The technology also yields rapid test results, is relatively inexpensive, and can be repeated over time to monitor the cancer or its response to treatment.

The advent of new cancer therapies means that patients can live longer with the disease. However, time and exposure to different treatments cause cancers to change. Liquid biopsies can show if a tumor has acquired mutations or aberrations or become resistant to therapies.

The presence or absence of tumor DNA can also show if there is a residual cancer following a surgery or chemotherapy treatment, or if a tumor has recurred. Learning about the tumor's unique genetics can inform treatment decisions and suggest new therapeutic options.

"I see opportunities for liquid biopsies making a difference at all stages of a person's journey with cancer," Kasi says. "From gaining diagnosis when you don't have enough tissue to work with, to getting results faster, to tailoring therapy based on the presence of residual disease or the changing genetics of the tumor. In many ways, I consider liquid biopsy as my standard of care for most, if not all, patients depending on the stage of their cancer. It truly has the potential and already is revolutionizing cancer care for our patients.”