A prostate pill with Parkinson’s potential

Can a prostate drug also slow the progression of Parkinson’s disease?

That’s the unexpected possibility that has emerged from an international collaboration involving researchers at the University of Iowa Carver College of Medicine and the Beijing Institute for Brain Disorders in China.

“Current medicines can partially alleviate some of the symptoms of Parkinson's disease, but we have zero treatments that change the progressive course of this neurodegenerative disease,” says Michael Welsh (74MD, 77R), director of the Pappajohn Biomedical Institute at the UI, and a Howard Hughes Medical Institute investigator. “I’m really excited about this finding because I think it could become a real game-changer for people with Parkinson’s disease.”

The findings, which combined basic bench science with big data analysis of patient records, are so compelling that the UI team, including neuroscientists Nandakumar Narayanan, MD, PhD, and Jordan Schultz, PharmD, have already started a small phase 1 clinical trial to test the drug, terazosin, in people with Parkinson’s disease. The team is currrently enrolling participants.

“What is particularly exciting is that terazosin is a ‘repurposed’ drug, so we have a lot of safety data already from its clinical use to treat enlarged prostate,” Narayanan says. “This is the beginning of what we hope is a sustained and rigorous effort to test this molecule prospectively in order to really determine whether this works.” 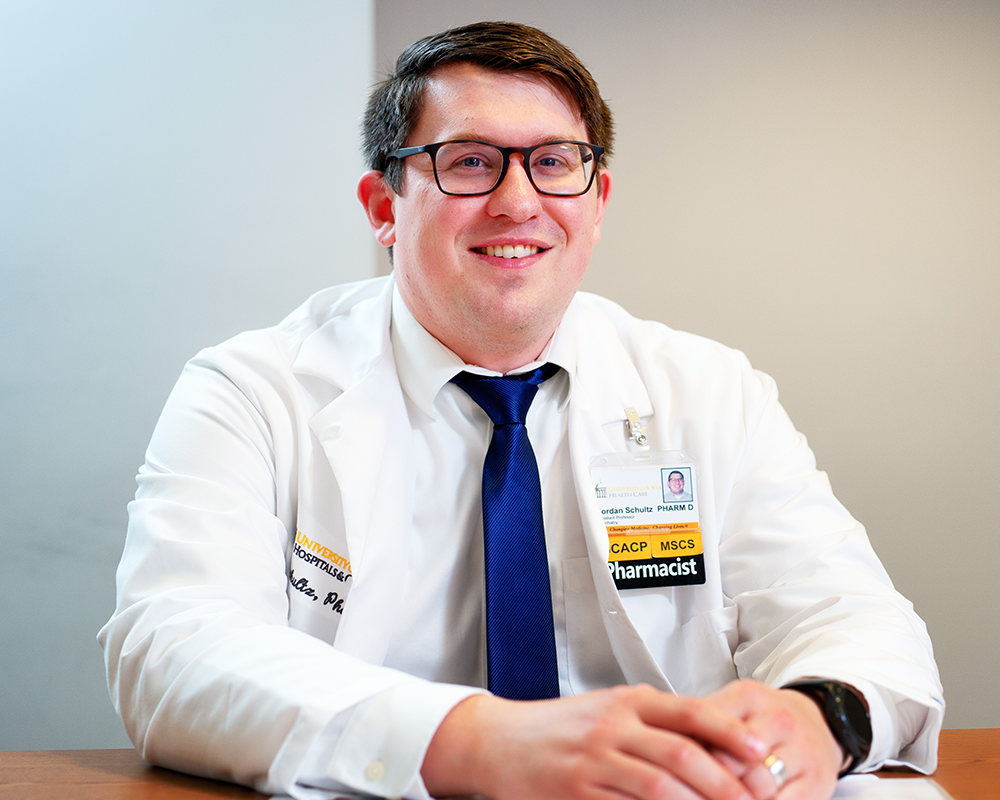 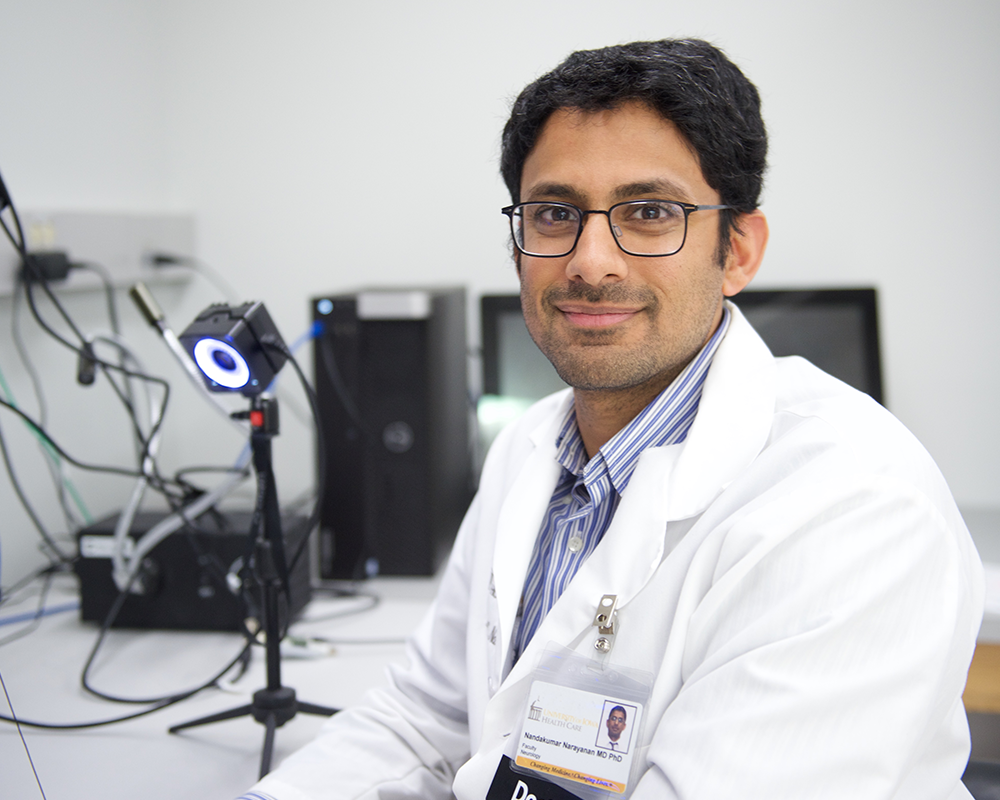 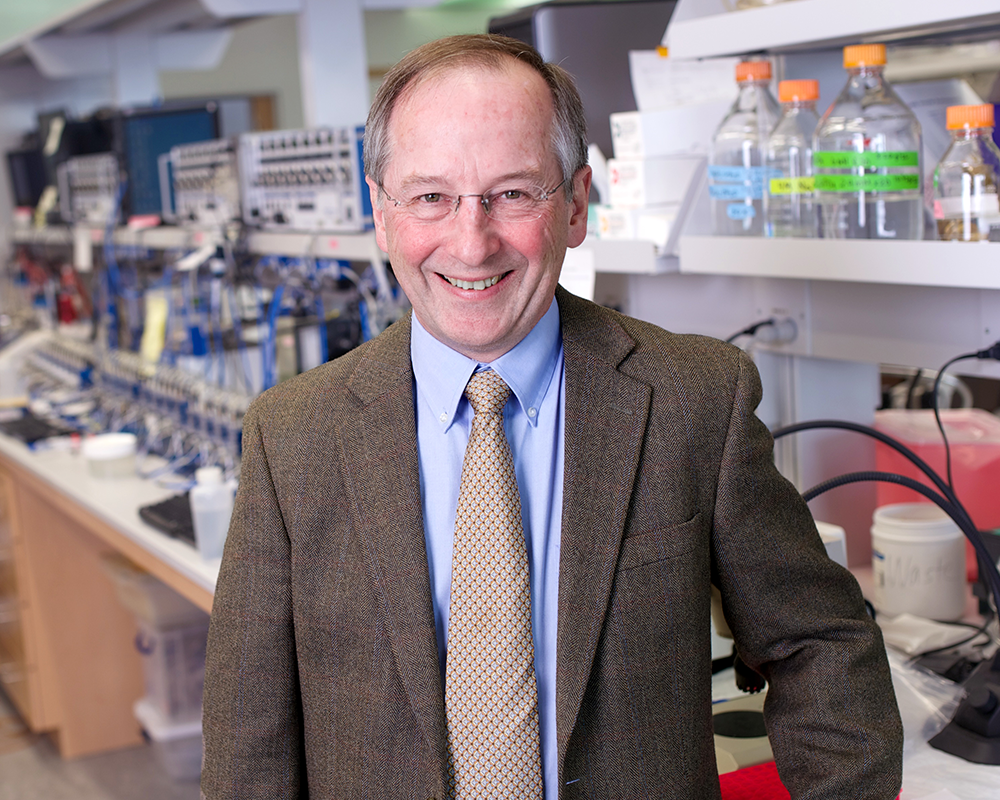 The study is a testament to the power of scientific collaboration—nurtured through mentoring, personal connections, and a commitment to working across disciplines to find better treatments for patients.

The initial discovery was made by Lei Liu (02PhD), a professor at Capital Medical University in Beijing, China, who received his doctorate from the UI in 2002 working with Welsh. Although the two scientists have not worked together much since Liu left Iowa, they have maintained a strong connection.

Using an unbiased screening experiment, Liu discovered that terazosin, a drug used to treat benign prostatic hyperplasia (enlarged prostate), could also block cell death. His team then determined that this cell-protective activity is due to terazosin’s previously unknown ability to activate an enzyme called PGK1, which is critical for cellular energy production.

Two or three days later, they came back with the data, and I just about fell out of my chair.”
Michael Welsh, MD, professor of internal medicine, director of the UI Pappajohn Biomedical Institute, and Howard Hughes Medical Institute investigator

The convergence of these lines of research allowed Liu and Welsh to reconnect to investigate terazosin’s ability to boost energy production and prevent cell death in experimental models of Parkinson’s disease, including fruit flies, mice, rats, and human cells. The scientists found that giving terazosin before the onset of cell death prevented neurodegeneration. Furthermore, the drug could slow or stop neurodegeneration even if treatment was delayed until after neurodegeneration had started to develop.

“When we tested the drug in various different animal models of Parkinson’s disease, they all got better. Both the molecular changes in the brain associated with cell death and the motor coordination in the animals improved,” Liu says.

However, encouraging results in animals often fail to produce similar outcomes in people. So, Welsh tapped into his strong scientific collaborations at Iowa to get insight into the potential for terazosin to have an effect on Parkinson’s disease in patients.

“Mike walked down to my office and asked what I thought of the findings,” recalls Narayanan, a UI neurologist who cares for patients with Parkinson’s disease and studies the condition in people. “There have been many [preclinical] studies with interesting results like this, but what was lacking was a real clinical component.”

Welsh and Narayanan quickly realized that one group of people who tend to get Parkinson’s disease—older men—are the same people who are likely taking terazosin for enlarged prostate. That meant that existing clinical databases might hold clues about terazosin’s clinical effect in people.

So, Narayanan and Schultz, UI assistant professor of psychiatry, examined the Parkinson’s Progression Markers Initiative (PPMI) database, which is sponsored by the Michael J. Fox Foundation for Parkinson's Research.

The data was exciting. It showed that men with Parkinson’s disease who were taking terazosin had reduced rates of progressive motor disability compared to men with Parkinson’s who were taking a different drug, tamsulosin, for enlarged prostate. Tamsulosin serves as a good control because it is also used to treat benign prostatic hyperplasia. Unlike terazosin, it does not have any effect on the PGK1 enzyme.

“Two or three days later, they came back with the data, and I just about fell out of my chair,” Welsh says. “Could not believe it. It was so cool!”

I don't know of many stories like this that have basic science produce rigorous and convergent lines of evidence that also have clinical evidence in them.”
Nandakumar Narayanan, MD, PhD, associate professor of neurology

However, the PPMI is a small database. Only 13 men were identified who were taking terazosin or one of two similar drugs that also activate the PGK1 enzyme, compared to 293 men with Parkinson’s who were either taking tamsulosin or were not taking any of these drugs. While the differences in motor decline between the two groups were statistically significant, the team knew they needed to confirm the findings using a much larger dataset. Once again, the network of scientific and personal connections provided a way forward.

“I don’t know of many stories like this that have basic science produce rigorous and convergent lines of evidence that also have clinical evidence in them,” adds Narayanan, who is a member of the Pappajohn Biomedical Institute and the Iowa Neuroscience Institute at the UI. “These results grew out of the unique collaborative environment we have here at the University of Iowa, and specifically in the PBI, and was really facilitated by our ability and willingness to interact across disciplines.”

“There is a lot of work still to do, but it’s a first glimmer, for me, of hope. I think this is going to be great for patients and for Iowa,” Narayanan says.

Learn about our clinical trial