Seeing through a different lens
UI Health Care first in Iowa to offer non-surgical treatment for congenital heart disease
International Family Medicine Clinic: breaking cultural barriers
Q&A with Alejandro Comellas
For the 20 years that it’s been around, the Mobile Clinic has been growing and adapting

Seeing keratoconus through a different lens

When Gabi Von Roedern was in high school, her optometrist said something wasn’t right with her eyes. Not only was her vision imperfect, but her eyes were dry and red all the time.

“I was told, ‘You’re overwearing your contact lenses, or it’s the very beginning of something else,’” she recalls.

But contact lens hygiene wasn’t the issue. Von Roedern had keratoconus, an eye condition where the normally round, dome-shaped cornea becomes weak and irregular. People with keratoconus have distorted, blurry, or double vision and are sensitive to light. They may also see halos when driving at night, or what Von Roedern describes as seeing fireworks around any headlight.

She got lucky, in a way. She was a graduate student at the University of Iowa studying German history when she finally decided to explore the “something else” that could be wrong with her eyes. She landed in the office of Christine Sindt, OD, FAAO, clinical professor of ophthalmology and visual sciences in the UI Carver College of Medicine, who has been studying keratoconus for more than 20 years. Sindt has created a revolutionary, extremely customized contact lens for patients with keratoconus and other eye diseases.

“All of these people who were previously told to go home and be blind now have another option,” Sindt says.

Keratoconus is classified as a rare disease, though how many people have it is still not understood. The condition is not well known, and eye problems are often attributed to something else, as it was for Von Roedern until she was in graduate school.

“We used to think it was one in 2,000 people, but we now think it’s possibly one in 200,” Sindt says of the frequency of the disease. That doesn’t mean there’s a sudden rise in cases. Keratoconus is being discovered more often, mostly because of the popularity of laser eye surgery.

With more corneas being examined—and the equipment to do it in more optometrists’ offices—more cases are being found. That and other technological advances in optometry equipment mean “we now have the ability to diagnose it and the ability to find it in its early stages,” Sindt says.

Diagnosis can now happen even before the patient notices any vision changes, says Marcus Noyes, OD, FAAO, FSLS, UI clinical assistant professor of ophthalmology and visual sciences. He met Sindt at a conference while a student and was fascinated by her research, which eventually led him to apply for a job at Iowa.

“In the last 10 years, the technology for determining keratoconus has gone through the roof,” he says.

With better technology and dissemination of knowledge, it is believed that 1 in 200 people have keratoconus, according to Sindt. Previously, it was believed to be 1 in 2,000 people.

Keratoconus can be genetic (Von Roedern has a cousin with the disease), but it often shows up in people who rub their eyes frequently. That’s because constant, aggressive rubbing weakens the collagen of the eye. Without strong collagen, the structure of the cornea degrades because collagen can “bend and stretch and snap just like the fiber of jeans,” Sindt says.

Patients have traditionally had two treatment options. They can undergo collagen cross-linking, a procedure where riboflavin B2 is put on the surface of the cornea and absorbed by collagen fiber.

When exposed to a specific wavelength of ultraviolet light, the cornea bonds and sticks those collagen fibers together.

“It doesn’t make the disease better, but it prevents the disease from getting worse,” Sindt says, which is why early detection is crucial.

“If you could catch keratoconus when it barely affects vision, that’s far better than if you catch it down the road when it severely affects how people see,” she says.

Patients can also undergo a corneal transplant, which comes with its own risks.

“It’s not just cornea rejection or failure, but these patients are more likely to develop glaucoma, inflammation, and a whole host of other problems,” Sindt says. “Many times, patients will sit in my chair and think a corneal transplant is a cure, but it really takes one disease and effectively gives you another.”

Sindt knew there had to be a better answer and thought about a worn-out knee on a pair of jeans. She wanted to create a solution that’s “just like a patch.”

“It’s not going to create a new pair of jeans, but you can still wear them with the patch,” she says.

That started a 20-year journey to figure out how to create a kind of clear eye patch—a new contact lens. First, she went into the health sciences library and started reading old books on how to fit contact lenses and how the first lenses were developed and manufactured. She also started collecting boxes of old lenses, which she keeps in her office.

“We think of the contact lens industry as being around forever, but we’re in generation 2.5 of the technology,” she says.

That also meant many contact lens pioneers were still alive, so she interviewed them about their process. 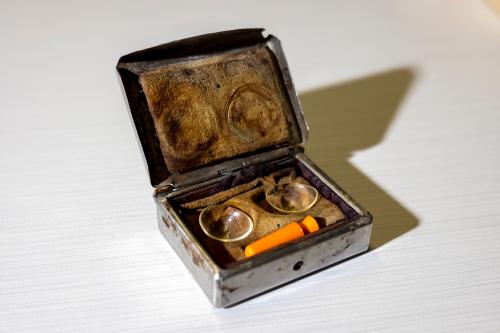 Sindt collected boxes of old lenses as she was learning to develop and manufacture customizable contacts.

“They used to put plaster on people’s eyes to create 3D impressions,” she notes.

That outdated approach led Sindt to the UI College of Dentistry and Dental Clinics. Faculty and staff taught her about impression materials and compounds used for teeth, which prompted her to call companies that make impression compound materials.

She also got help from the dental college’s prosthodontics department and used their high-resolution scanner. She talked to chemists about what she wanted to do and what would work and be safe to put on an eye.

While working on a study project on immune cell complexes in the cornea, she got in contact with a company that did 3D analysis. After the study was over, she continued to work with them on making 3D images of the eye.

She then partnered with a Tippie College of Business master’s class on creating a business plan for what would become EyePrint Prosthetics, which she launched in 2015.

Via 3D imaging and a Food and Drug Administration-approved ocular compound and insertion tray, EyePrint can create lenses that “are whatever the shape of the person’s eye is,” Sindt says.

“Because of the unique shape of the lenses, it allows me to do things that other lenses might not be able to do. The optics don’t have to be in the center of the lens. I can move the optics to whatever the patient is looking through. I can be really narrow on what the prescription is.”

The company is based in a suburb of Denver but works with a network of optometrists around the country who create the impressions and send that information back to EyePrint to make and ship lenses.

Noyes recently worked with a 50-year-old patient who never knew he had keratoconus. With just a demo lens, his vision went to 20/20.

“He asked why no one told him about this before,” he says. “It’s just not commonly used, and the condition is still rare, but we’re getting the word out there.”

Image
Sindt inspects the surface of a patient's eye in the UI Contact Lens Clinic.

Von Roedern was fit for her first EyePrint lenses in 2016.

“They sharpened up my vision and helped with light sensitivity,” she says. “I’m very functional and happy with my lenses.”

She has not undergone cross-linking because the lenses have corrected her vision to the point where she doesn’t need it.

The experience was so positive that she also became an EyePrint employee. After finishing her master’s degree, Von Roedern moved back to Colorado, where she’s from, right at the time EyePrint was setting up their headquarters.

“I’d probably been at EyePrint for six months when [Sindt] came to visit. She said she’d never seen my eyes so white. They were just red and angry all the time before,” Von Roedern says. “It’s really changed my life.”

With technological advances, optometrists are better able to detect keratoconus in its early stages. And with early detection and diagnosis, providers in the UI Contact Lens Clinic can manage keratoconus effectively.